About your Fiddle Teacher

Welcome to my Online Fiddle Lessons! My name is John Cockman, and I live in the Appalachian Mountains of Watauga County, NC. First of all, thank you for your subscription. This site supports my musical outreach here in Western NC.

I was born just south of Blowing Rock, NC, but grew up in Sherrill's Ford on the family peach farm. I discovered my love of fiddling at the age of 13 when I formed a bluegrass gospel band with my father, older sister, and three younger brothers called The Cockman Family.

Having become a professional fiddler at a young age, I devoted myself to the study of many styles of fiddling. After becoming a master of Bluegrass, Gospel, Old Time, Celtic, Country and Cajun fiddling, I discovered that I get the most joy from teaching others to play the music I love.

Over the past 20 years, I have systematically developed an intuitive teaching style that gets immediate results. My combination of tablature, notation, measure-by-measure instruction, and metronome playback has helped thousands of students reach their goal of jamming and performing on what I believe is the greatest instrument ever created. 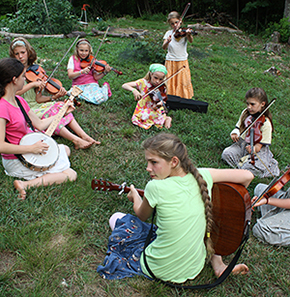 More on my history: As a family growing up, we had no television, video games, or other "modern" form of entertainment, and so we made music. My mother played piano and my father played guitar, and they taught us how to sing and harmonize at an early age. We cut our musical teeth on hymns and old country ballads, until one night my father heard a group called Doyle Lawson and Quicksilver, and we fell in love with bluegrass gospel. Soon we were singing and playing at local churches and fiddlers conventions, receiving encouragement and praise from all the area musicians that we looked up to and wanted so badly to emulate. It wasn't until later that I really began to appreciate what the older musicians had done by stepping back in order to allow the younger ones to come to the forefront.

I moved back to Blowing Rock in 1992, and married my wife Jennifer in 1996. In and in 2000 and 2001 we were blessed with two beautiful daughters, Arwen and Lorien. In 2015 we adopted another daughter, Morgen. Although I no longer tour, I love spending time with my family and we all make music together, and perform locally at churches and festivals. And of course, I love spending time online teaching fiddle and visiting with my friends on the BGD forum. 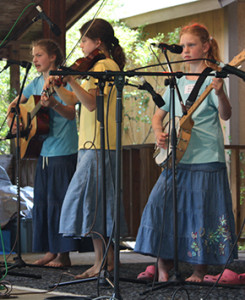 In 2008, I began to offer "free fiddle classes" to local youth. When we outgrew my house, we began meeting meeting in Memorial Park in downtown Blowing Rock. I now have between 50 and 70 students attend these free lessons, which culminate in a family fiddle recital at the end of summer. From my summer fiddle camp, a half-dozen youth bluegrass and old-time bands have formed, which have become involved in performing at festivals, churches, rest homes, and fiddlers conventions. Many have gone on to become professional musicians.

About the same time I started the free fiddle classes, I started uploading brief free lessons onto YouTube, at channel JohnsFiddleLessons. In 2013, a good friend purchased BluegrassDaddy.com, and gave it to me so that I could create a fiddle lesson website dedicated to online fiddle instruction. I then determined to create the best fiddle lesson resource on the internet, and to offer it at an affordable price. It is my vision that people all over, not just here in the mountains, will begin to love and play the music that we grew up with.

Thank you for becoming a member of BluegrassDaddy.com and for supporting my efforts to pass down this great music. It is my prayer that the proceeds from this site will enable me to expand my free local instruction, and help even more of the kids here, and around the world, to learn and to perform the music of their rich and unique mountain heritage.