This is an online fiddle lesson for the tune "Black and White Rag." BluegrassDaddy.com is your best source for Bluegrass, Old Time, Celtic, Gospel, and Country fiddle lessons! 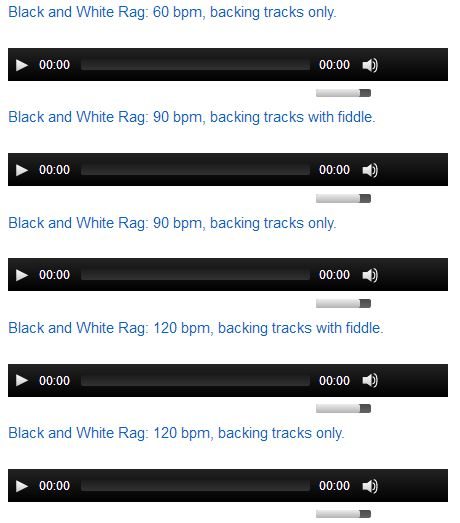 Black and White Rag is a 1908 ragtime composition by George Botsford. The first known recording of this piece was by Albert Benzler, recorded on Lakeside/U.S.Everlasting Cylinder #380 in June 1911. This recording is somewhat rare (Lakeside/U.S.Everlasting cylinders, though molded celluloid on a wax/fiber core, were made in small batches), and significant. Edison featured the Black & White Rag on one of his Early Diamond Disc Records (50116) from 1913 played by a Brass Orchestra. One of the best known versions of this piece of music was recorded in 1952 by pianist Winifred Atwell, and helped her to establish an international profile. Originally the B-side of another composition, Cross Hands Boogie, Black and White Rag was championed by the popular disc jockey Jack Jackson, and started a craze for Atwell's honky-tonk style of playing. The recording became a million selling gold record, and in the UK was later used as the theme tune for the long-running BBC2 television snooker tournament, Pot Black. Black and White Rag was also later arranged for use as the music in the original 1985 BBC Computer game, Repton, and some of its sequels. Reference: Wikipedia The tune has also become a fiddle standard with recordings by musicians such as Johnny Gimble and Bennie Thomasson. I actually took the below version of the tune from an early Quebe Sisters album titled Texas Fiddlers.