This is an online fiddle lesson for the tune "Man of Constant Sorrow." BluegrassDaddy.com is your best source for Bluegrass, Old Time, Celtic, Gospel, and Country fiddle lessons!

Video #1: This video shows what you can do with long hair, a fiddle, and BluegrassDaddy.com backing tracks: 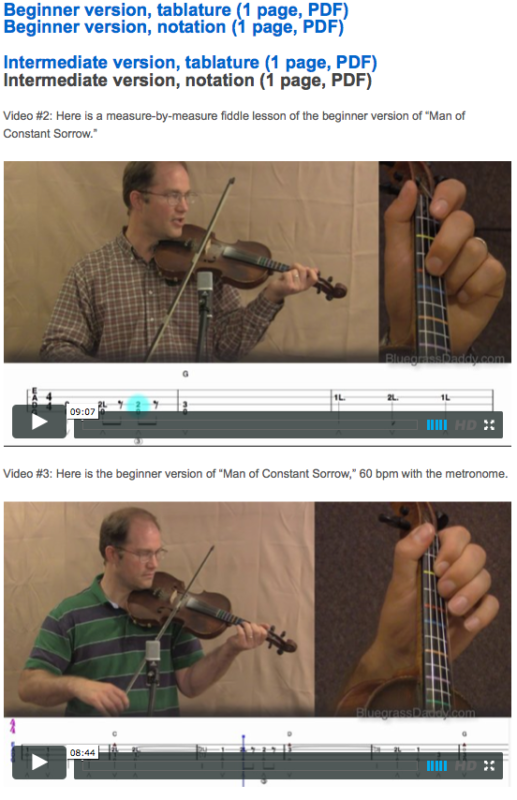 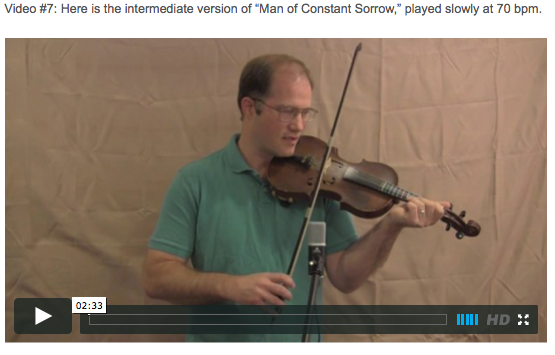 "Man of Constant Sorrow" (also known as "I Am a Man of Constant Sorrow") is a traditional American folk song first recorded by Dick Burnett, a partially blind fiddler from Kentucky. The song was originally recorded by Burnett as "Farewell Song" printed in a Richard Burnett songbook, about 1913. During 1918, Cecil Sharp collected the song and published it as "In Old Virginny" (Sharp II, 233). An early version was recorded by Emry Arthur in 1928 (Vocalion Vo 5208). Public interest in the song was renewed after the release of the 2000 film O Brother, Where Art Thou?, as it plays a central role in the film's plot. The song was also included in the film's highly successful, multiple-platinum-selling soundtrack.

Some uncertainty exists as to whether Dick Burnett himself wrote the song. One claim is that it was sung by the Mackin clan in 1888 in Ireland and that Cameron O'Mackin emigrated to Tennessee, brought the song with him, and performed it.

On October 13, 2009, on the Diane Rehm Show, Ralph Stanley of the Stanley Brothers, born in 1927, discussed the song, its origin, and his effort to revive it:

"Man of Constant Sorrow" is probably two or three hundred years old. But the first time I heard it when I was y'know, like a small boy, my daddy – my father – he had some of the words to it, and I heard him sing it, and we – my brother and me – we put a few more words to it, and brought it back in existence. I guess if it hadn't been for that it'd have been gone forever. I'm proud to be the one that brought that song back, because I think it's wonderful."