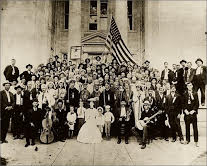 Thank you to BluegrassDaddy member Chuck Parcher, who submitted this inspiring article (written by his cousin) about his 2nd great-uncle.  The photo to the left shows the Cockrell String Band in front.  The photo below is fiddler Jordan Cockrell.  The Cockrell family had a saying, "If your roofs were fixed, if you crops were in, if your fences were all mended, then your fiddle playing must be suffering." 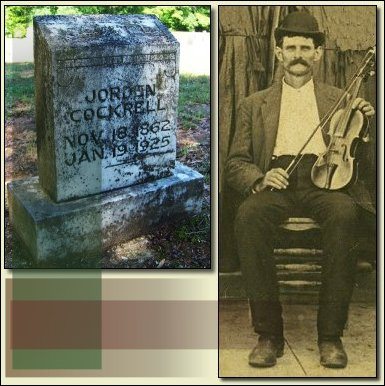 Jordan Freeman Cockrell was an Itawamba County, Mississippi hill farmer and a fiddler.  He was my great-grandfather’s baby brother and the youngest son of Elum and Caroline Devaughn Cockrell.  At ten years of age, he had journeyed to the hills of Itawamba County with his family during 1872 on an ox-pulled wagon from the Clay and Randolph counties area of eastern Alabama.  Like the rest of his family, Uncle Jordan loved music.  My grandmother always said the family nearly lost a cotton crop once because of music.  Every time a neighbor would pass by the family’s cotton field and say “let’s play some music,” the family would drop their hoes without hesitation and head to the big front porch of their old house for a lively music session.  Uncle Jordan and other members of the family made up the Cockrell String Band in Itawamba County.  When not farming, they would play at various social functions all over the rural countryside of Itawamba and Lee counties.  It was during 1904 when Uncle Jordan read an article in the local newspaper about a World’s Fiddling Championship to be held up near St. Louis while the World’s Fair was being held.  He carefully tore the article from the newspaper and saved it.  While laboring in the cotton fields his mind would often wander to that neatly torn and folded announcement while dreaming about taking the long journey to win that contest.Eventually he voiced his personal dream to family members.  He brother Elijah said, “Jurd, now why would you want to do that?  You won’t win a thing.”  His modest dream was also met with ridicule and consternation from some others in the family and community, most informing him he would just make a fool of himself.  Yet he kept that little dream alive in his heart, quietly saving up the scarce money needed to get to that faraway contest in Missouri.With his determination to go, the family finally succumbed to his wishes.  On an early morning during the hot Mississippi summer of 1904, well after the cotton crop had been laid by, the 42 year old farmer started the first leg of his journey.  He left the hills of Itawamba County walking the dusty road to the Guntown Depot where he would catch the afternoon train to Memphis with not much more than the clothes on his back, a few hard-earned dollars in his pocket, his fiddle under his arm, and a dream in his heart.A week passed and the anxious family had heard absolutely nothing from him.  Finally one late afternoon from the homestead porch, they spotted him off in the distance slowly walking toward home down the dusty Guntown Road through the Mantachie Creek bottomlands.  It was a long journey home and he was a tired man.  But he was a happy man.  He had a smile on his face, prize money in his pocket and a first place ribbon in his hand!

I was at Uncle Jordan’s grave this morning at the old family burial grounds on a wooded hill overlooking that same old Guntown Road below, snaking its way through the fertile Mantachie Creek bottomlands like a casually discarded ribbon.  It was a splendid dew-covered Itawamba County, Mississippi spring morning. Standing at his grave marked with an old moss-stained marble monument under an ancient water oak was so peaceful and calm - a serene place of special solitude.  The early morning silence was interrupted by a lone mockingbird perched on a branch up in the old tree welcoming me with a pleasing song.  With a little imagination I could distinctly hear the faint sounds of an old worn fiddle in the distance playing Sally Goodin’ as a tired wandering man with a contented smile on his face made his long journey home.  It has been said that the key to happiness is having dreams and the key to success is making those dreams come true.  I think Uncle Jordan was a happy and successful man.