This is an online fiddle lesson for the old time tune "Anna Lee."
This is by special request for my friend Keith.

Video #1: Here is a video of me performing the old time fiddle tune "Anna Lee." This is the way I learned to fiddle, before Joel Little talked me into putting it under my chin. I still tuck it into my armpit every now and then, usually to keep it away from my ear (and the microphone) when I sing. 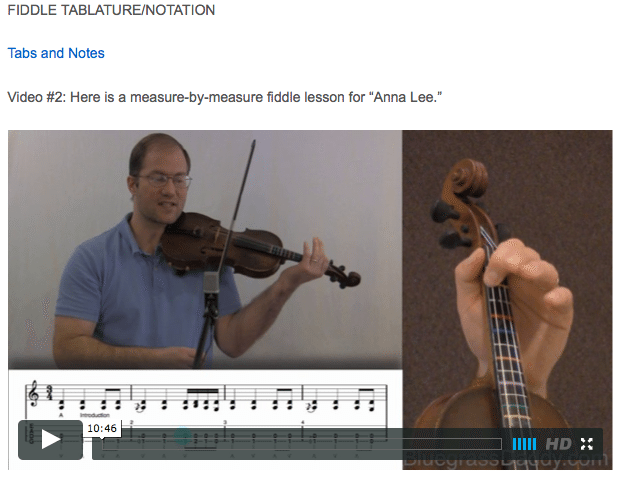 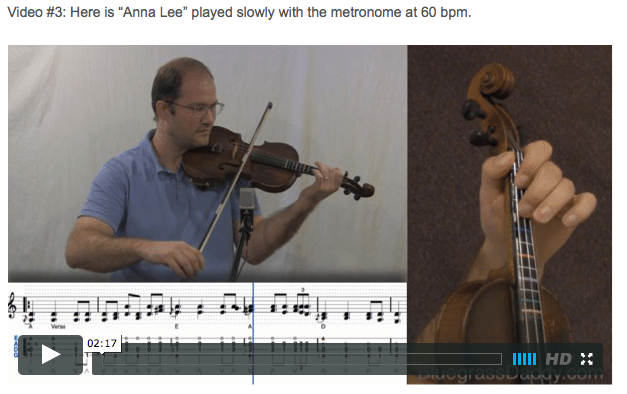 "Anna Lee" was written by Laurelyn Dossett.  Here is the history of the song in her own words:

It seemed a good start: I needed to write an 18th-century death ballad, and I needed to do it fast. The writer Preston Lane and I were about to go into the rehearsals of our first Appalachian play, Brother Wolf. He had added a scene and suggested a lullaby's accompaniment, but I heard something darker.

I needed a name for my character, so I began with Rosalie, after my great-grandmother, who had been known for her singing. The name worked well, with the syllables rolling musically. But Rosalie is the name of one of my three daughters, and it seemed a bad idea to drown the kid in a ballad. I cast about for alternatives for a few minutes before landing on the similarly lyrical Anna Lee. I finished the song while sitting in carpool lines at my daughters' schools one afternoon.

Six months later, I was in New York for readings with the cast of Brother Wolf. Anna Lee now had a tender role in the play. During a break, the multi-instrumentalist and Bob Dylan sideman Larry Campbell found me and the show's fiddler, Riley Baugus, tuning our instruments in the stairwell.

"Who wrote the Anna Lee song?" he asked enthusiastically. "I am making a record with Levon Helm. Anna Lee is his old friend from Arkansas—Anna Lee of 'The Weight.' It would be cool to bring her full circle on this record. Can I take the song to Levon?"

And that is how Miss Anna Lee introduced me to Levon Helm.

The introduction induced fortunate incidents—trips to Levon's famous Midnight Ramble in Woodstock; a Grammy for Levon's Anna Lee-inclusive album Dirt Farmer; a memorable night of Levon and his friends in Nashville, dubbed "The Ramble at the Ryman." Every time I saw Levon he asked about my children, teasing my husband to get me back home so I could keep writing songs.

Before the Ramble at the Ryman concert, I got to meet the real Anna Lee Amsden in Nashville; she was none too thrilled about being drown in a song and didn't mind telling me so. Still, that evening, I sat in the pews of the Ryman with my playwriting partner, Preston Lane. We listened, spellbound as Levon sang with an angel band—his daughter, Amy Helm, and Larry's wife, Teresa Williams, singing harmony. Larry played the fiddle. They sang my words like a prayer, with Levon's voice pulling every ounce of emotion from each note, each phrase.

"I'll return to you dear, in the dimming of day
As the sparrow returns to her nest."

There was I time when I sang to my children constantly; I was their singer, free to sing them to sleep or into calm, whenever they needed it. As I was writing, I foolishly wondered if —when they are old and I am gone, as Levon is now—they would remember the voice that sang their lullabies. As it turns out, there are some voices we can never forget, voices that work their way into our hearts, brains and bones. And so I remember Levon, singing. Anna Lee has indeed come full circle.