This is an online fiddle lesson for the tune "Arkansas Traveler." BluegrassDaddy.com is your best source for Bluegrass, Old Time, Celtic, Gospel, and Country fiddle lessons!

MP3 #1: Listen to a famous version of "Arkansas Traveler" with dialogue by Len Spencer, Edison Records, 1902.

Video #1: This is a video of me, myself, and my daughters covering Len Spencer's famous 1902 dialogue of Col. Sanford Faulkner's Arkansas Traveler. Enjoy!

Video #2: Here is a video of me performing the fiddle tune "Arkansas Traveler" at 90 bpm. 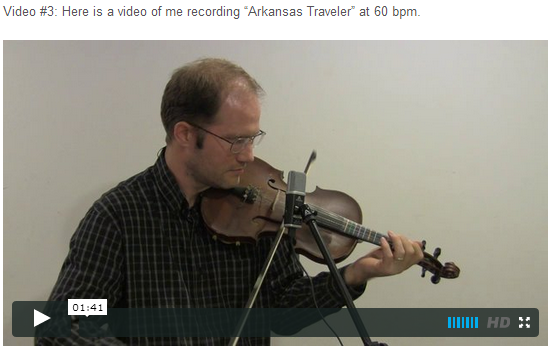 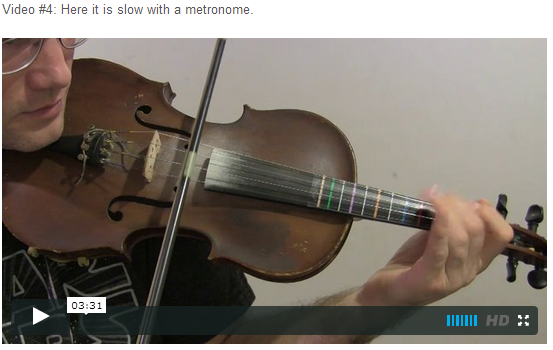 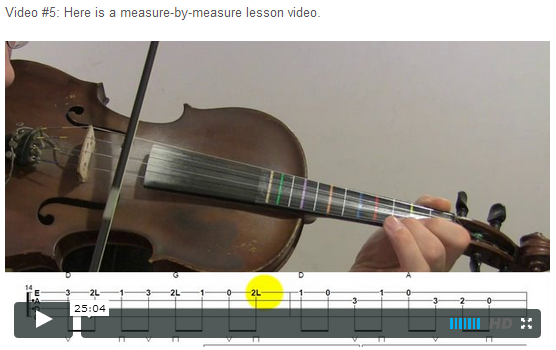 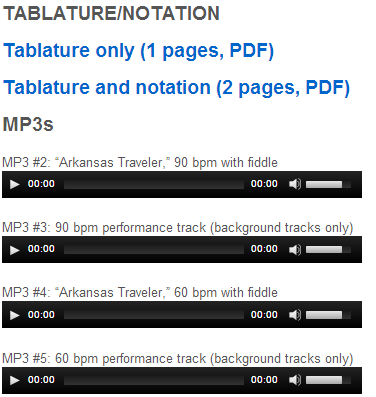 The Arkansas-based version of the Traveler is said to have begun in 1840. Colonel Sanford Faulkner got lost in rural Arkansas and asked for directions at a humble log home. Faulkner, a natural performer, turned the experience into an entertaining presentation for friends and acquaintances in which the Traveler was greeted by the Squatter at the log cabin with humorously evasive responses to his questions. Finally, the Traveler offered to play the second half, or “turn,” of the tune the Squatter was playing on his fiddle. The tune was the “Arkansas Traveler.” In his happiness at hearing the turn of the tune, the Squatter mustered all of the hospitality of his household for the benefit of the Traveler. When the Traveler again asked directions, the Squatter offered them but suggested that the Traveler would be lucky to make it back to the cottage “whar you kin cum and play on thara’r tune as long as you please.” At approximately the same time Faulkner began performing the “Traveler,” a similar performance of the “Arkansas Traveler” tune and a related dialogue emerged outside the state. One cannot tell with certainty which version came first. According to Thomas Wilson, writing in Ohio History in 1900, customers were attracted to the Golden Fleece Tavern in Salem, Ohio, by performances of the “Traveller” before 1852. While the Arkansas-based version of the dialogue portrayed tensions based upon differences among people from Arkansas—such as urban versus rural or wealthy versus poor—most versions told the story from the Traveler-as-outsider perspective, taking an uncomplimentary view of the state. Mose Case, an albino African-American entertainer from Buffalo, New York, performed the Traveler and his version ended by declaring that the Traveler “has never had the courage to visit Arkansas since!” The Case version was published in 1863 and distributed widely.

For thirty years Kit The Arkansas Traveller was one of the most popular plays in America. Opening in Buffalo on April 20, 1869, the play debuted to great acclaim in New York City in 1871. Frank Chanfrau and, later, his son Henry, owned the production and starred as Kit Redding, touring until 1899. So popular was the play that it maintained an annual engagement in Boston from 1872 to 1889.
"The Arkansas Traveler” appeared in early recordings, both cylinder and disk, in the form of a humorous dialog. In 1902 the Len Spencer dialog version became the first song to sell one million records, according to one source. Then the tune itself became the first (or at least one of the first) "country music” songs ever to be recorded, by Eck Robertson and Henry Gilliland in June, 1922. This was among the first fifty recordings selected for the National Recording Registry, founded to preserve significant sound recordings in the United States. The Traveler has been recorded hundreds of times, in traditional, jazz and even symphonic arrangement, proving to be one of the most popular tunes in American history. Len Spencer (Feb 12, 1867 – Dec 15, 1914) was an elocutionist and recording artist whose performed speeches, skits, and songs. His most successful recording was the Arkansas Traveler, the most popular recording in America in 1902. Charles D’Almaine played the fiddle on the recording. Dialogue of the Arkansas Traveler by Len Spencer, Edison Records [1902].

The Turn of the Tune, is Arkansas artist E. P. Washburn’s companion piece to his more famous Arkansas Traveler painting, both of which he painted before 1859. By 1870, both paintings would be immortalized in lithographic print form by Currier & Ives, in New York City. The print features the traveler playing "The Turn of the Tune" on his fiddle for the squatter and his family. Below the print is text that recalls the conversation between the traveler (thought to be Arkansan Sanford Faulkner) and the squatter. (historicarkanasas.org)

Here are the children's lyrics put to the tune of Arkansas Traveler: