This is an online fiddle lesson for the gospel tune "O Holy Night."
This is by special request for my friend Great Scott.

Video #1: Here is a video of me performing the gospel tune "O Holy Night." 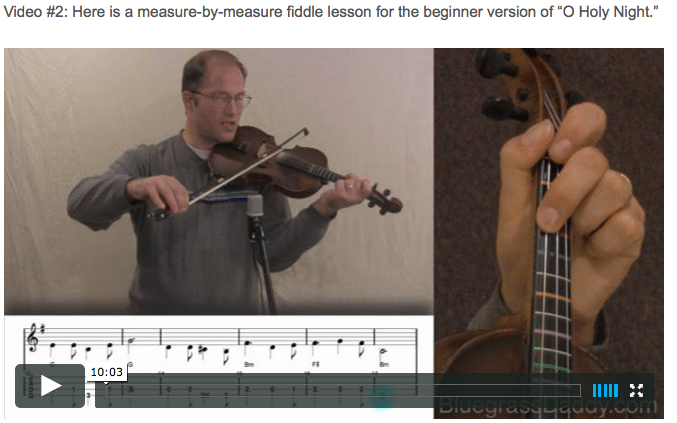 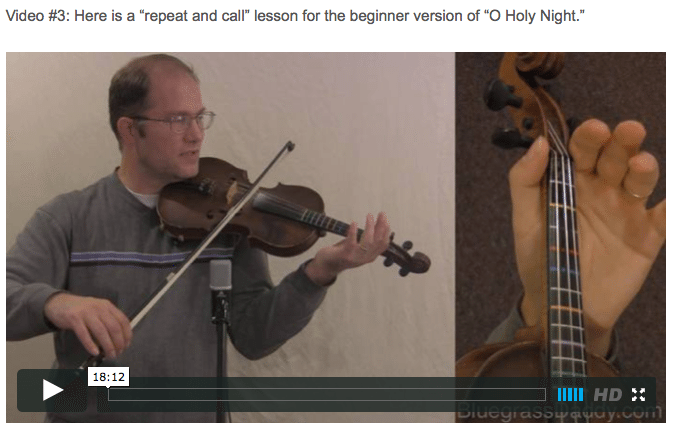 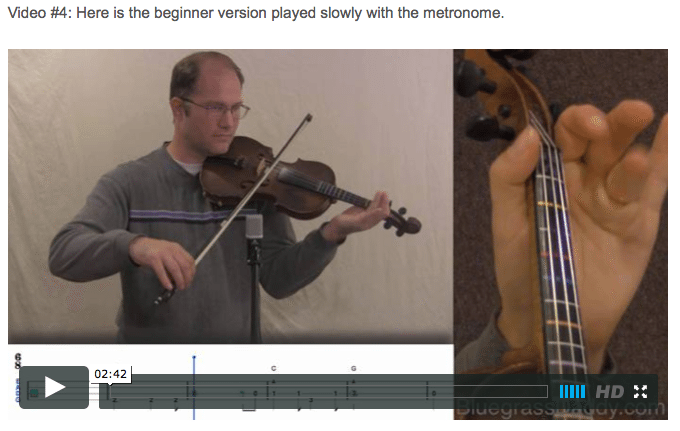 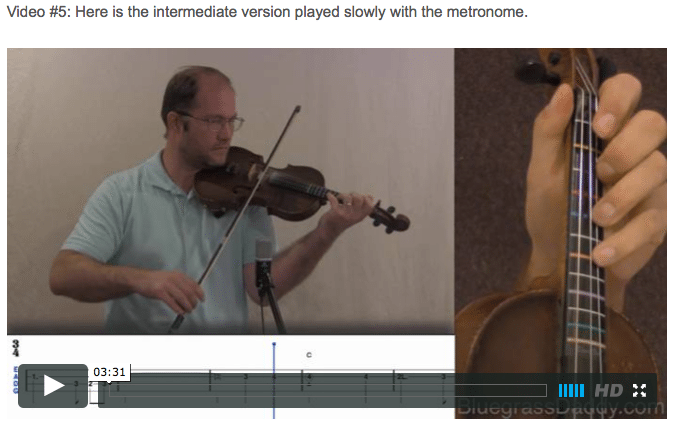 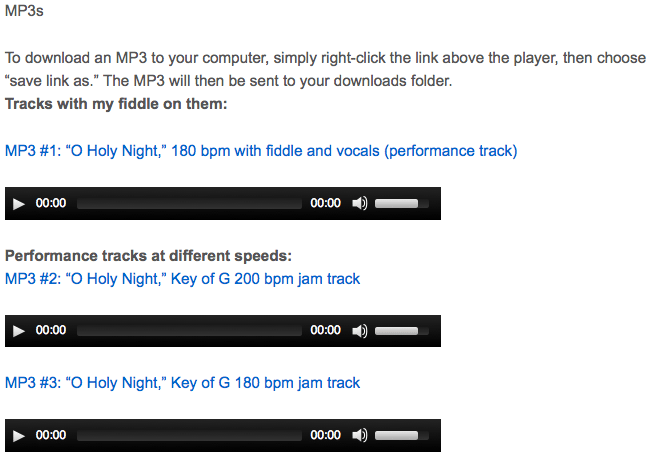 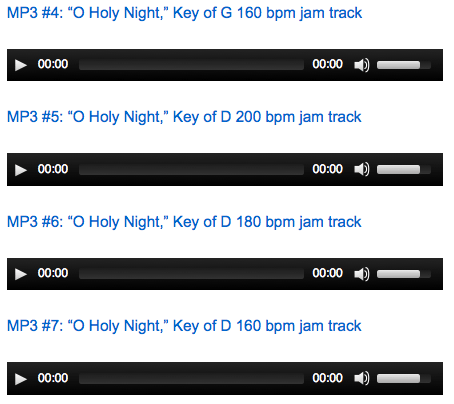 The strange and fascinating story of "O Holy Night" began in France, yet eventually made its way around the world. This seemingly simple song, inspired by a request from a clergyman, would not only become one of the most beloved anthems of all time, it would mark a technological revolution that would forever change the way people were introduced to music.

In 1847, Placide Cappeau de Roquemaure was the commissionaire of wines in a small French town. Known more for his poetry than his church attendance, it probably shocked Placide when his parish priest asked the commissionaire to pen a poem for Christmas mass. Nevertheless, the poet was honored to share his talents with the church.

In a dusty coach traveling down a bumpy road to France's capital city, Placide Cappeau considered the priest's request. Using the gospel of Luke as his guide, Cappeau imagined witnessing the birth of Jesus in Bethlehem. Thoughts of being present on the blessed night inspired him. By the time he arrived in Paris, "Cantique de Noel" had been completed.

Moved by his own work, Cappeau decided that his "Cantique de Noel" was not just a poem, but a song in need of a master musician's hand. Not musically inclined himself, the poet turned to one of his friends, Adolphe Charles Adams, for help.

The son of a well-known classical musician, Adolphe had studied in the Paris conservatoire. His talent and fame brought requests to write works for orchestras and ballets all over the world. Yet the lyrics that his friend Cappeau gave him must have challenged the composer in a fashion unlike anything he received from London, Berlin, or St. Petersburg.

As a man of Jewish ancestry, for Adolphe the words of "Cantique de Noel" represented a day he didn't celebrate and a man he did not view as the son of God. Nevertheless, Adams quickly went to work, attempting to marry an original score to Cappeau's beautiful words. Adams' finished work pleased both poet and priest. The song was performed just three weeks later at a Midnight Mass on Christmas Eve

Initially, "Cantique de Noel" was wholeheartedly accepted by the church in France and the song quickly found its way into various Catholic Christmas services. But when Placide Cappeau walked away from the church and became a part of the socialist movement, and church leaders discovered that Adolphe Adams was a Jew, the song--which had quickly grown to be one of the most beloved Christmas songs in France--was suddenly and uniformly denounced by the church. The heads of the French Catholic church of the time deemed "Cantique de Noel" as unfit for church services because of its lack of musical taste and "total absence of the spirit of religion." Yet even as the church tried to bury the Christmas song, the French people continued to sing it, and a decade later a reclusive American writer brought it to a whole new audience halfway around the world.

Not only did this American writer--John Sullivan Dwight--feel that this wonderful Christmas song needed to be introduced to America, he saw something else in the song that moved him beyond the story of the birth of Christ. An ardent abolitionist, Dwight strongly identified with the lines of the third verse: "Truly he taught us to love one another; his law is love and his gospel is peace. Chains shall he break, for the slave is our brother; and in his name all oppression shall cease." The text supported Dwight's own view of slavery in the South. Published in his magazine, Dwight's English translation of "O Holy Night" quickly found favor in America, especially in the North during the Civil War.

Back in France, even though the song had been banned from the church for almost two decades, many commoners still sang "Cantique de Noel" at home. Legend has it that on Christmas Eve 1871, in the midst of fierce fighting between the armies of Germany and France, during the Franco-Prussian War, a French soldier suddenly jumped out of his muddy trench. Both sides stared at the seemingly crazed man. Boldly standing with no weapon in his hand or at his side, he lifted his eyes to the heavens and sang, "Minuit, Chretiens, c'est l'heure solennelle ou L'Homme Dieu descendit jusqu'a nous," the beginning of "Cantique de Noel."

The story goes that the fighting stopped for the next twenty-four hours while the men on both sides observed a temporary peace in honor of Christmas day. Perhaps this story had a part in the French church once again embracing "Cantique de Noel" in holiday services.

Adams had been dead for many years and Cappeau and Dwight were old men when on Christmas Eve 1906, Reginald Fessenden--a 33-year-old university professor and former chief chemist for Thomas Edison--did something long thought impossible. Using a new type of generator, Fessenden spoke into a microphone and, for the first time in history, a man's voice was broadcast over the airwaves: "And it came to pass in those days, that there went out a decree from Caesar Augustus, that all the world should be taxed," he began in a clear, strong voice, hoping he was reaching across the distances he supposed he would.

Shocked radio operators on ships and astonished wireless owners at newspapers sat slack-jawed as their normal, coded impulses, heard over tiny speakers, were interrupted by a professor reading from the gospel of Luke. To the few who caught this broadcast, it must have seemed like a miracle--hearing a voice somehow transmitted to those far away. Some might have believed they were hearing the voice of an angel.

Fessenden was probably unaware of the sensation he was causing on ships and in offices; he couldn't have known that men and women were rushing to their wireless units to catch this Christmas Eve miracle. After finishing his recitation of the birth of Christ, Fessenden picked up his violin and played "O Holy Night," the first song ever sent through the air via radio waves. When the carol ended, so did the broadcast--but not before music had found a new medium that would take it around the world.

Since that first rendition at a small Christmas mass in 1847, "O Holy Night" has been sung millions of times in churches in every corner of the world. And since the moment a handful of people first heard it played over the radio, the carol has gone on to become one of the entertainment industry's most recorded and played spiritual songs. This incredible work--requested by a forgotten parish priest, written by a poet who would later split from the church, given soaring music by a Jewish composer, and brought to Americans to serve as much as a tool to spotlight the sinful nature of slavery as tell the story of the birth of a Savior--has become one of the most beautiful, inspired pieces of music ever created. (findthepower.com)