This is an online fiddle lesson for the old time tune "Pretty Saro."

Video #1: Here is a video of me playing the old time tune "Pretty Saro." 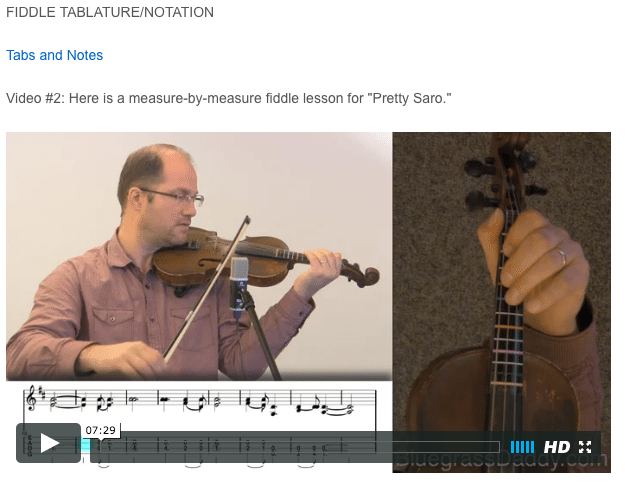 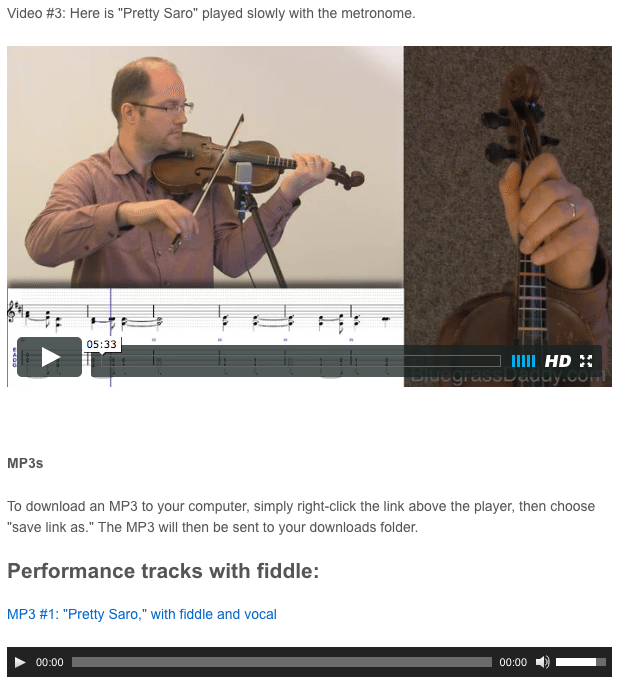 Variations of "Pretty Saro" were collected by several folksong collectors in the early 1900s in the Appalachian mountains. The earliest publication was in Lomax's North Carolina Booklet (1911). A variation in Vance Randolph's Ozark Folksongs has the woman named Molly.

Dorothy Scarborough (A Song Catcher in Southern Mountains, American Folk Songs of British Ancestry), who collected a version in North Carolina in 1930, notes that her source said the appropriate date might be 1749, as that was a time of significant immigration from Scotland and Ireland, where the tune was probably from. She also says the term "freeholder" would indicate a British origin.*

Pretty Saro is also related to the Irish song Bunclody whose first lines of the first three verses correspond closely to these.* In addition to those songs, according to The Ballad Index, Pretty Saro is related to At the Foot of Yonder Mountain, where the woman is referred to as Mary rather than Saro or Sarah. Some scholars trace the origin of that song to "an ancient hymn to the Virgin Mary."

Pretty Saro/Sara was sung unaccompanied by Cas Wallin, Madison County, North Carolina (see: Version 5). It has been collected in Virginia, Kentucky, North Carolina, Georgia, Mississippi, the Ozarks, Indiana, and Iowa amongst other states.
The Frank C Brown Collection of North Carolina Folklore suggests that that the odd line "banks of said brow" might be a corruption of the line of the another version which has "the mountain's sad brow."

The use of the word “freeholder” places the song’s origin in England as the term is not used in the United States. It appears that "Pretty Saro" and its doppelgaenger "At the Foot of Yonder Mountain" are mostly derived from "The Streams of Bunclody." The 1749 date looks good too. There is a local tradition that "The Streams of Bunclody" was written from America by an immigrant from County Wicklow and sent back to Ireland.

If this immigrant or a son or daughter or someone who had the song from him was among the early European settlers of the Appalachians, the American versions could easily have been adapted from the immigrant's song. 1749 could be the date of the immigrant's arrival in America, although the stanza with the date did not go back to Ireland or was dropped there. Of course, there are a lot of floating lyrics here, and John Moulden points out the dangers of taking such material as a basis for identifying oral texts as versions of the same song. What one must look for is distinctive stanzas; otherwise there would be just one song of which "Pretty Saro," "On Top of Old Smokey," "It was in the Month of January," "The Wagoner's Lad," and countless others would be examples. But these do have distinctive content and it seems that "Streams of Bunclody" begat "Pretty Saro."

This piece seems to break up into two families, "Pretty Saro" (which appears to be more popular) and "At the Foot of Yonder Mountain." In the latter, the woman is "Mary," not "Saro." Broadwood and Gilchrist argued that all this is based on an ancient hymn to the Virgin Mary. If so, that would argue that the "Yonder Mountain" form is older. But we all know how active some folklorists' imaginations are. (Ballad Index)

Randolph separates "In Eighteen-forty-nine" as a song made up of scraps and fragments, including "Pretty Saro," with echoes from "Jack O'Diamonds," "Farewell, Sweet Mary" and "Rabble Soldier."