Playing scales with modal chord progressions is the perfect way to develop your improvisational skills. The reason for this is that no matter what chord is being played, the melodic instrument still has only the basic seven notes to choose from. In other words, if you are playing using the major scale, almost any note you play will sound great within a modal arrangement. This builds confidence while teaching you to improvise within an ascending progression. 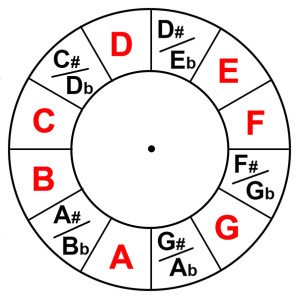 Notice the scale wheel above. For now, let’s say you are constrained to stepping only on the red letters. No matter which letter you start on, you will be taking five whole steps and two half-steps in order to go up or down an octave. Depending on which red letter you start on, you will have a different pattern of whole steps and half-steps. These seven possible step patterns are called the modes.

The first mode of the seven-mode sequence is called the Ionian Mode. If you are stepping on the red letters, you will start with letter C to begin the Ionian mode, otherwise known as the major scale. It's familiar interval pattern is two whole steps, one half step, three whole steps, and then one last half-step to complete the octave: W-W-h-W-W-W-h. You probably recognize this because it was heavily featured in the Sound of Music movie. In shape-note singing, the shape names representing the Ionian Mode are Do-Re-Me-Fa-So-La-Ti, then ending with another Do, one octave higher than the first.

If you were to play those same seven notes, but starting with D, the you would play D-E-F-G-A-B-C. These are the still the white notes on a piano, just starting at a different location. This is the second mode, called Dorian. Since the second mode started with on the D note, you would call it D Dorian. And since the Dorian Mode does not start with two whole steps, it is called a minor scale. After D Dorian comes E Phrygian, another minor scale. Then come F Lydian and G Mixolydian, each major scales. Next is A Aolean, another minor scale. Last is B Locrian. It is the only mode that has two half-steps in the first four intervals. It is called a half-diminised scale.

Notice in the table above, if you played the first note of each mode, you would be playing a C Major Scale.

Below, I have linked to MP3s of ascending modal chord progressions. For example, the C modal progression is C, then D minor, then E minor, the F, then G, then A minor, then B half-diminished. All of these chords use the same seven notes. The easiest way to play along with these MP3s is to play the first note of each modal chord. This will create a simple scale, with one note per chord change. Then, the patter repeats.

For each key, you have four different choices. You can choose to change chords after two beats, three beats, four beats, or eight beats.

Once you become adept at playing scales using the first note of each ascending modal chord, is is time to start improvising like I did in the video at the top of this page. Below is some sheet music with some suggested "improvisations" to get you started. These are in the primary bluegrass keys of A, Bb, B, C, D, E, F, and G.